Freddy Fazbear is the main antagonist of The Documentary "Five Nights at Freddy's".He is an animatronic bear who,like the other animatronics in the game,is left in Freddy Pizza Parlor in 1994.

He probably can see only the office but probably you can avoid with turning off the light like the other animatronics.And appears in the main menu with new and improved in the game v2.0.

Freddy Fazbear in Thank you image.

Freddy in the office 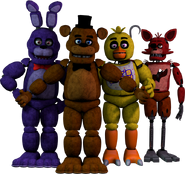 Freddy as seen in the Extra Menu.
Add a photo to this gallery
Retrieved from "https://the-documentary-series-new.fandom.com/wiki/Freddy_Fazbear?oldid=125"
Community content is available under CC-BY-SA unless otherwise noted.